I snapped under the pressure. Now I have to make it whole. 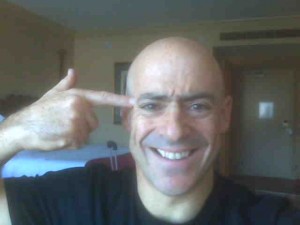 Last Tuesday was a very long, very bad day. I flew to Baltimore from Toronto to deliver two workshops – one for the YPO organisation and the other for the PCM Construction company. I left my house at 5.45am and returned at 9.45pm. Both sessions were fabulous. The people were open and responsive. The feedback was resoundingly positive. But the day ended badly.

It ended badly because I ended it badly. As I walked through my front door, the exhaustion hit me. I pecked my wife, Hilary,  half-heartedly on the cheek as she welcomed me home. I grunted something inaudible in response to her enquiry as to how my day went. I saw her stiffen as she turned away. That was bad, but it was about to get a lot worse.

As I warmed up some soup and scanned the newspapers, my sixteen year old daughter, Dani-Emma, came into the kitchen. She saw my fatigue and grouchiness and reached out to me in conversation around the issue of community service. She asked me my advice. I gave it to her. She didn’t like my response and got up to leave. Of course, I ordered her back. She refused. So I snapped. I yelled at her about the need for respect, courtesy, maturity, understanding and a whole lot more. The irony of the moment was completely lost on me.

Dani-Emma looked at me in stunned amazement. Then she started to cry. “You never shout at me, Daddy” she sobbed as she fled to her bedroom. That was bad, really bad. But it was about to get worse.

Hilary approached me and asked me what was wrong. “Nothing” I snapped. Then I told her to leave me alone. That was bad, really, really bad.

But it was about to get better. As I stared into the abyss of my minestrone, I realised my stupidity, hypocrisy and insensitivity. I ran upstairs to my daughter’s room, knocked on her door and entered. Although her eyes were still moist, she was already immersed in a conversation with multiple friends on her Apple Mac. She looked up in reprimand and disappointment: “You never shout at me” she repeated. I said the only two words I could say: I’m sorry. I walked towards her and opened my arms for a hug. Dani-Emma reluctantly submitted, head turned away. I wasn’t going to get off that easy.

Then I walked to my bedroom and repeated my apologies to my wife. I tried to hug her – same response. I wasn’t receiving any absolution that night.

Why do I share this message of domestic discord with you? Because I know you also have your Stupid Moments. I know you let the stress sometimes turn you into someone you loathe. It’s called being human. And Love means being forgiven when you’re being the worst part of being human. That’s what I needed last Tuesday. And that’s what I received the next morning. I’m forgiven but the act is not forgotten. I’m on probation with the two most important women in my life. And that’s a scary place to be. So I resolve to be aware of  my state. I resolve to master my emotions. I resolve to rise above my fatigue. I resolve to never vent my negativity on others. I resolve to walk my talk. Until the next time…